After a few days of communication, a dental lab in the US decided to try us. He has been working with several Chinese dental labs for years, so there was no need to instruct him about how to send a package. Yet, he was having a headache about one particular case: a 9-unit zirconia case that was remade for 3 times. He was helpless until we had a conversation. We talked about many details on WhatsApp, but I would like to display only important information.

Contents hide
1. Getting started
2. Receiving a photo and instructions
3. Draft designs and a solution
5. Changes for better anatomy and shade
6. Final work and positive feedback

Let’s check the following email. The customer sent us tracking number, and he gave us 4 days to process his cases. 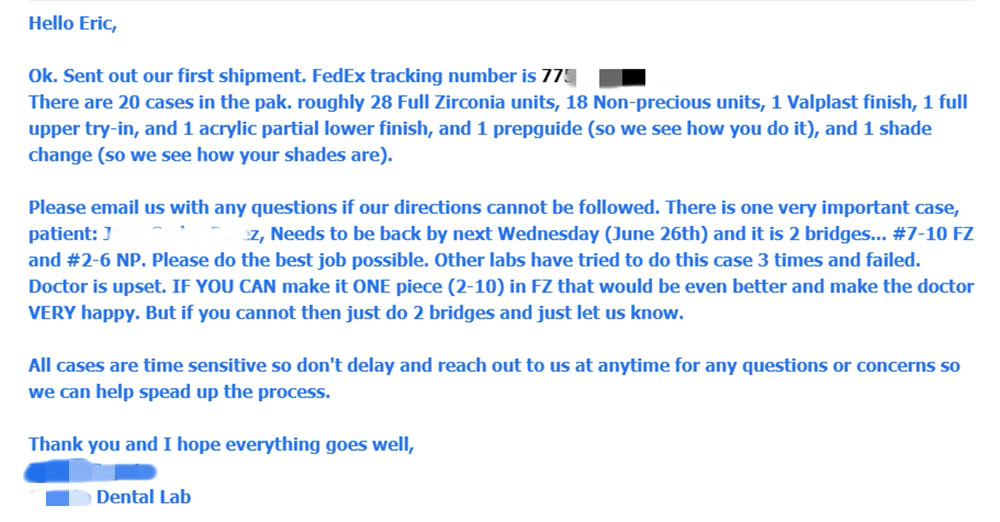 2. Receiving a photo and instructions

3 days later, we got the package in our Hong Kong office. After unpacking the case, we found there were quite a few stone models (must be from other labs) – only this case could weighed over 1 KG. Thankfully, the customer also sent new impressions, and a photo showing the patient’s oral condition.

It is important that we can have new impressions, new bites and photos, if it is for a remake case, especially a case from another dental lab. For example, with this photo, we can learn the stump shade of one tooth was very dark and needed special treatment.

The customer originally wanted a PFM bridge, but later he changed his mind and asked for a zirconia bridge. For the 4 front teeth, he wanted to add porcelain on the buccal for a more natural look. For the 5 back teeth, using full zirconia was fine. After all, it was more important to consider function for molars. A full zirconia crown is like a full cast crown – strong and durable, but a full zirconia crown is more aesthetically appealing and bio-compatible.

3. Draft designs and a solution

We had designs and sent screenshots to the customer for confirmation. First, we tried to make one zirconia bridge. However, this case was remade several times, and there were undercuts. In order to be safe, we suggested to make 2 short bridges. The design looked fine, and we had the customer’s approval to proceed.

Now we had 2 bridges, with one being added porcelain on the buccal. For the 4 front teeth, the space between them was big. This was challenge for our technicians for the contouring – the function should be met while keeping aesthetics. They had to frequently adjust the work for the best results.

5. Changes for better anatomy and shade

Later, the bridges were glazed, but our technicians were not satisfied with the front teeth —  the 2 front teeth were not equal in size; they also appeared to be too big. Our technicians intended to fix the case. Nonetheless, it was the day when we had to send the package (according to our agreement), and it was around 3PM – we could normally send packages only before 4:30PM. If we tried to fix the work, we could never make it for the day’s shipment.

Finally, we made a decision – we sent out all the cases on the day, except this one. The reason was simple: it was being remade for 3 times already. If we messed up this case, our customer would have to face a difficult situation. So we sent photos to our customer, telling him we would like to make it better. Thankfully, we had his understanding, though he was quite sensitive to the turnaround time.

Therefore, the glaze was scrapped, and technicians added porcelain again, so they could contour the work for a better anatomy. A few hours later, we had the work at hand, but our technicians unfortunately found the shade between front teeth was too dark. Without any hesitation, they decided to remove glaze and redo it for the third time! Now we had one day to go, enough time for a better dental work.

A glazed dental work for the second time. You can see the shade between the gaps of front is too dark.

The next day, we had this final work and successfully sent the case. A few days later, we received a positive response from our customer. His headache was put to an end. Now he keeps sending one or two packages to us each week.

A finished zirconia case, one full zirconia bridge and one layered zirconia bridge. It is too bad that we did not take photos with a professional camera. This case was fixed again and again, leaving us no time for making good photos . 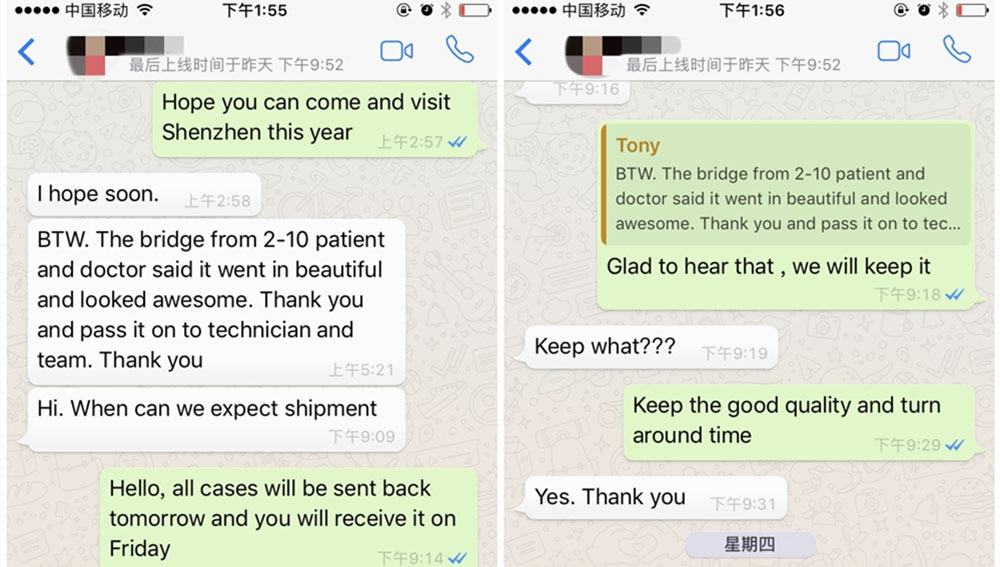 Please note that we trimmed and glazed this case for 3 times in our lab. We could have just sent the work at first, because the customer was not very demanding. However, we had our own standards and principles – a case that could not please our QC should never come out of our lab. We think the greatest difference between normal cases and high-end works lies on details. That’s what sets us apart from others.

About the Author: Robust Team